This story secured me the first prize in an all India level competition organized by half Baked Beans. 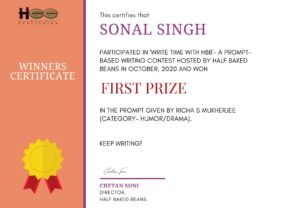 I squatted on the staircase, hidden from view and looked at the scene below. It was an unbearably hot afternoon. June in London is hard on us homeless. Food is scarce and whatever we do manage to get is usually unpalatable or rotten. Driven by hunger, I had once gobbled down some few such morsels.

The tummy ache it had given me!

My stomach had bloated like those balloons the rich kids bought from the old crone by the sidewalk. The pain had clamped its claws on my distended innards and twisted. I had felt that I would die. But, we blacks are made of sturdier stuff. Our race isn’t easily felled. However, since then, I had steered clear of any discarded food.

Now, I only focussed my energy on stealing fresh food, preferably off of the tables. Not that I wish to brag but I am rather a natural at theft. It’s an art, I have developed with patience. Some people just have sticky fingers but my technique is…well, it is what it is. I don’t want to give my secret away, do I?

Today, my sights were focussed on an Indian wedding celebration in the lawns of a hotel. It wasn’t a big hotel, just seven stories and a huge expanse of green lawn that dipped into the Thames. Of late, this place had become my favourite. I came here often and knew every inch of the property. The food they served had the most amazing aromas. And, the taste…oh, for it I could easily die with a bloated belly.

From my vantage point, I saw some men in white setting the food tables.

My heart sang in happiness. I loved buffets. There was always so much food that no one noticed a missing plateful.

I abandoned my location and moved closer to the tables in the gardens, taking care to remain in the shadows. My mouth salivated at the assault of the aromas.

Yesssss! They were serving Chicken Biryani, my favourite.

Furtively, I inched closer, my eyes on the plate of Biryani that a child had taken a bite out of and discarded. One man’s loss is another’s gain! The plate sat now, all by its lonesome on a small table near the overflowing trash bin. I zeroed in on it and bade my time.

A few doves were cooing on a branch nearby. They sounded far more melodious than those dumb, quacking ducks in the water. Some stray crows flapped their wings in the trees and then hopped down on the ground. No doubt, they were pecking for scraps. Scavengers, the lot of them! I hated those crows on principle. But, today, I did not care. My mind was focussed on the Biryani.

Slowly, one teeny step at a time, as the men in white moved away, I snuck up to the table. And, then…ah, absolute nirvana! I gorged, taking huge chunks of the meat and rice and literally gulping the scrumptious thing down. I ate happily, expanding the curve of my belly. Oh, it groaned and protested. I felt the first twinges and tell tale signs of cramps from the overeating. But, I steeled my mind to ignore it – mind over matter, right?

I was chomping into a leg of Chicken leg when…

A murder! It was a murder!

My blood curdled at the sight. I tell you, the chicken that I was eating could not have squawked louder than I did at that point. They noticed.

My bladder emptied of its own accord. More than the tummy cramp, I felt my heart clamp with fear. My belly roiled, wanting to throw up the delicious food. But, I did not drop the chicken. Oh no! I fled up the stairs, still clutching the leg.

Go, go, go, my brain urged in the face of peril.

I literally flew as I ran from them, by small body pumping at the threat of mortal peril. Enraged, they chased me, all of them, right to the top of the hotel.

Do they blame me for what happened?

Alas!  I could not escape. They caught up to me and cornered me on the terrace. In fear, I backed up against the ledge and looked down.

As I scanned the garden from my precarious perch, seven floors below my trembling legs, two regrets flashed through my tortured mind. One. Should I have walked away when I still had the option? Two. Would I ever eat another sinful plate of Chicken Biryani?

I know that had I walked away from the Biryani when my belly protested the first time, I would not have been in this predicament. But, the succulent chicken had been too good to resist. Biryani is my weakness. Given a chance I would eat it every day, for the rest of my life. So, regret is not what I felt then. Why rue what’s done?

But, sadly now, the result of my foolishness was – trembling legs!

No, no, I wasn’t scared because I was looking down seven floors or even because I faced deathly peril. My legs trembled because my belly moaned from the pain of overeating. The gates threatened to open.

Uh oh, here they come, I thought in panic as they advanced. They moved closer and flanked me. I doddered, caught between them and the seven story drop. I braced myself. But, then, I could hold it no longer.

Oh no, here it comes, fellas…, I thought is dismay as my bowels distended. I turned my back to them, stuck by butt out and let loose a stream of the vilest, smelliest poop, right onto their feet.

Hey, don’t judge me. You would have too if you had eaten half as much of the spicy stuff as I had.

Caw…caw…’ I said, flapped my wings and took flight. A lone raven fleeing from a murder of crows.

Author’s note – this story was written in response to an open writing competition by Half Baked beans. The prompt is highlighted in bold in the story. The word limit was 1000 and genre was humour/drama. This story won me the first spot – https://onsonalstable.com/half-baked-beans-write-time-contest/

I believe that life is a repertoire of anecdotes. The various situations that we encounter, the many incidents of every day, the people we meet, our conversations with them; all make life a melange of tales. And, that is what I attempt to capture through my writing. My cooking is no different! It reflects my love for travel and my love for innovation. The kitchen is my happy place. So, even though by vocation I am a recruiter (www.rianplacements.com), by passion I am a writer, home chef and a hodophile.
@SonalSingh_rian
Previous Half Baked beans – write time contest
Next Chef’s table studio – granny’s cooking contest