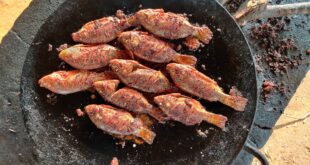 ‘Baba*, tell us a story,’ pestered a young child.

‘Yes Baba, please, please,’ said a chorus of others as they clustered around.

Old Abdul Jaffer’s rheumy eyes looked at the circle of eager faces. He blinked to focus better. Of late the cobwebs in his eyes had been more pestilent than usual. He wiped at an eye with the cuff of his pheran*.

He was the oldest man in the village. Hunched over on rheumatic bones, slightly deaf in an ear and leaning heavily on his wooden stick, he patrolled the village at nights. Most nights the village folk could hear the tap-tap of his cane as he ambled through.

To the eager beavers, he claimed to be the village protector. Most evenings, sitting by a fragrant pinewood bonfire, he told the children stories before they went home, after play. Of late the children had been pestering him more and more, remaining outdoors far longer than their mother’s liked it. Unmindful of the cold, much to the chagrin of their mothers, the children would sit and listen enraptured. Finally, the mother’s complained to Abdul.

‘Baba, tell us a scary story,’ suggested an imp today too.

‘Ooooh yes, please.’ They said eagerly. ‘We are not scared.’

‘Okay. Mind you then young scamps, this is a true story of a Chudail*.’ He said and began…

‘Nestled in a secluded glen in the high mountains of Kashmir, lies a tiny hamlet. It is accessible only by half a day’s trek on foot. The hamlet sits in a circle of wooden huts, bunched around a small maidan* and is shrouded by thick woods. On frigid nights when the ferocious northern gale whips though the statuesque Chinars, howling like a banshee, the denizens retreat indoors, abandoning everything.

Legend has it that those are the nights when she walks, seeking warm bodies to keep her cold self from freezing. Those calamitous moonless night when the mist clings to the woods, are her realm.

No one has seen her for she cannot be seen. But, for those who listen closely, on stormy nights the tinkle of her anklets can be heard echoing in the valley.’

The children looked at each other nervously. This was slightly scarier than they had bargained for. The youngest of the lot snuck a furtive glance at the dark woods.

‘Legend also has it that she is from the plains and she cannot bear our cold winters. She always comes with the first snow. So, when the first mist clings to the clammy woods, on nights like tonight, she comes seeking warm bodies. She abducts young disobedient children for their bodies are warm with mischief. Yes, they are her favorite.’

A collective gasp went up at these words. A few young ones gulped audibly. The older ones held hands and sneaked a nervous glance at the woods. Their faces registering fear in the glow of the bonfire.

One brave soul spoke up. ‘Baba, will she come tonight?’

Abdul chuckled. ‘Don’t know but the weather is turning, isn’t it?’

The first gust of wind blew in from the woods. A wind chime tinkled softly in the distance.

‘She’s coming, she’s coming,’ yelled a child, running pell-mell for home. The others soon followed, tripping over, toppling down in their haste to reach home. Soon the maidan was vacant.

Old Abdul cackled his toothless laugh and held his midriff. ‘They won’t be troubling me or their mother’s anymore.’

Pheran – Kashmiri coat made of wool

Maidaan – A clearing, or piece of land used for play etc

I believe that life is a repertoire of anecdotes. The various situations that we encounter, the many incidents of every day, the people we meet, our conversations with them; all make life a melange of tales. And, that is what I attempt to capture through my writing. My cooking is no different! It reflects my love for travel and my love for innovation. The kitchen is my happy place. So, even though by vocation I am a recruiter (www.rianplacements.com), by passion I am a writer, home chef and a hodophile.
@SonalSingh_rian
Previous The Lone trudge home
Next The Lost Shepherd