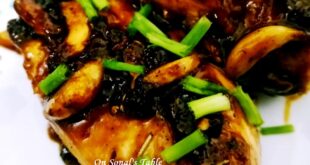 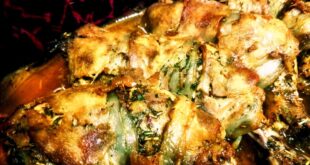 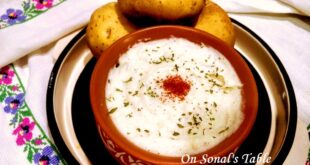 Did you know that the humble pea soup has been around for ages and versions of it have been eaten by most civilizations and cultures around the world? The traditional pea soup is actually the split pea soup which is made from the dried legume and not the fresh/frozen green pea. It is believed that the Greeks and Romans even cultivated this legume as far back as 500 to 400 BC and the vendors sold hot pea soup on the streets of Athens.

In 19th-century English literature, pea soup is referred to as a simple food and eating it considered as a sign of poverty. In fact, in Thomas Hardy’s ‘Tess of the D’Urbervilles’ there is an extract where Tess remarks – “we have several proofs that we are D’Urbervilles… we have a very old silver spoon, round in the bowl like a little ladle, and marked with the same castle. But it is so worn that mother uses it to stir the pea-soup.” (sic – source Wikipedia). Up until the 20th century the split pea soup in London was called the London particular and was named after the yellow smogs for which London was infamous.

Soupe aux pois (jaunes) (yellow pea soup) is a traditional dish in Québec cuisine and is popular in Germany wherein the soup often contains meat such as bacon or sausage. Erwtensoep, also called snert, is the Dutch version of pea soup. It is a thick stew of green split peas, different cuts of pork, celery, onions, leeks, carrots and sometimes potato.

In Sweden the soup is called ärtsoppa. In Finland it is called hernekeitto. In both countries the soup is traditionally served with mustard. Consumption of pea soup in Sweden and Finland dates back to at least the 13th century, and is traditionally served on Thursdays. This is said to originate in the pre-reformation era, as preparation for fasting on Fridays (source – Wikipedia). In Denmark it is called gule ærter and in Norway it is known as ertesuppe. In Finland the soup is made of green peas. In Sweden and Denmark yellow peas are used. The Polish culture associates this soup with the military and it is a popular dish.

Nowadays, the abundance of fresh peas as an ingredient has led to greener version of this soup. My soup is one such version made with the most basic ingredients to give a lip-smacking recipe.

I like to add some pan fried peas to the soup as a garnish. But, you can add some cheese, cream or even bread croutons.

Note – whenever I cook with butter, I like to add a few drops of oil to the butter as it hits the hot pan. This prevents the butter from burning. My secret ingredient for his recipe is cloves. Trust me; it makes all the difference in the taste.

I believe that life is a repertoire of anecdotes. The various situations that we encounter, the many incidents of every day, the people we meet, our conversations with them; all make life a melange of tales. And, that is what I attempt to capture through my writing. My cooking is no different! It reflects my love for travel and my love for innovation. The kitchen is my happy place. So, even though by vocation I am a recruiter (www.rianplacements.com), by passion I am a writer, home chef and a hodophile.
@SonalSingh_rian
Previous Broccoli and spinach soup
Next Mashed potatoes 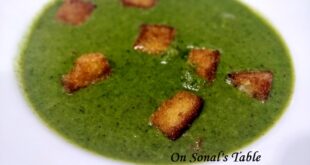 Spinach is a green leafy vegetable loaded with nutrients and antioxidants that boasts some formidable connections to amaranth and also beets and quinoa. It is an excellent source of vitamins and minerals and is loaded with proteins and carbohydrates. Broccoli is a rich source of both fiber and protein.