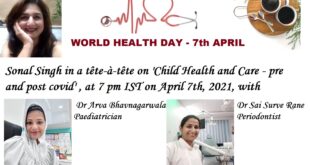 tête-à-tête on child health and care, pre and post covid

Tete-a-tete on ‘Bringing up the differently abled- a perspective’ 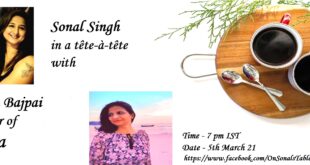 All that a newbie writer needs in a platform for recognition. Sadly, the publishing industry is filled with such pitfalls that a newbie can fall through the cracks faster than a pebble sinks into water.
Then, how would a newbie learn? Would anyone give a novice a chance to grow?
Well, that’s where the hive comes in. 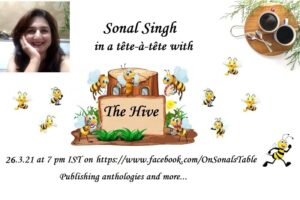 YouTube link –https://youtu.be/eoWQofDykOg
Facebook link – https://fb.watch/4FeE9rnCXm/
The Hive is a platform dedicated to publishing anthologies of short stories; a category typically underestimated by traditional publishers. They continue to bring out anthologies every year.
It started one day when a bunch of writers wondered if the days of Poe, Wilde, Doyle, and Lovecraft would ever come back. Since when did the art of great short storytelling die under the weight of five-hundred-page novels and reading challenges. Being writers they understood that many writers are not able to showcase their amazing talent of story writing only because they are not able to churn out novel-length works.
Being ardent readers of short stories, they also realized the dearth of good anthologies out there. So, for the love of storytelling, they decided to co-create The Hive, a non – traditional publishing collective, focused at this point only on anthologies.
What started as a collective of passionate writers is now a thriving platform that proudly presented its first anthology on Friday, the 13th March, in a genre that not many traditional Indian writers dare to tread; horror. Route 13 – Highway to hell, their Project numero uno, was an anthology containing 13 Horror stories from 13 different and amazing writers. Route 13 boasted a foreword from India’s premier horror author, Neil D’Silva, and hit the #1 spot in Amazon’s hot new releases for six weeks in a row!
Followed close at heel was Project #2, an e-book that was carefully curated by The Hive, with a selected collection of mini tales by their patrons. It is, of course, aptly named, The Best of Mini-Tales.
The third offering was – Blood Runs Cold.
They just couldn’t rest after the success of Blood Runs Cold, especially after that encouraging foreword from Damyanti Biswas. They followed Project #3 with Project #4, Best of Minitales Volume 2.
However, during the transition from horror to thrillers, they feared that The Hive could be typecast into a bucket. And they are anything but suitable to be fit into a box. So, they decided to surprise their patrons with Project #5, Tea with a Drop of Honey. A collection of stories that would soothe your soul. Quite like its namesake. Not only did they manage to get twenty-eight fabulous writers on board to bring you a cornucopia of feel-good stories, but they also managed to do their little bit by donating part of the proceeds of the sales towards the upkeep of Prani – the pet sanctuary.
Project#6, #Love, is their latest and most prestigious of offerings. This book is the first from The Hive’s stables to come to you in both e-book and paperback formats.
Share

I believe that life is a repertoire of anecdotes. The various situations that we encounter, the many incidents of every day, the people we meet, our conversations with them; all make life a melange of tales. And, that is what I attempt to capture through my writing. My cooking is no different! It reflects my love for travel and my love for innovation. The kitchen is my happy place. So, even though by vocation I am a recruiter (www.rianplacements.com), by passion I am a writer, home chef and a hodophile.
@SonalSingh_rian
Previous Kolkata chronicles – an A to Z guide for the uninitiated
Next tête-à-tête on child health and care, pre and post covid 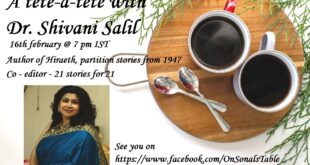 Dr Salil has an MD in Clinical Microbiology from Seth GSMC & KEM Hospital, Mumbai where she also worked as an Assistant Professor. A geographical move in 2018 let her take a much needed sabbatical and she decided to pursue a childhood passion – to be a writer. She has recently completed year-long, full time Masters in Fine Arts (Creative Writing) from Hong Kong University.