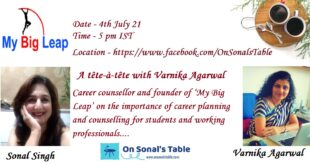 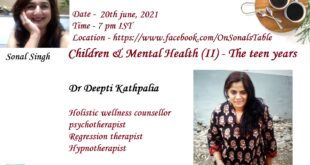 tête-à-tête on Children and mental health – the teen years 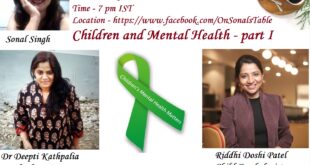 tête-à-tête on Children and mental health – the preteen years 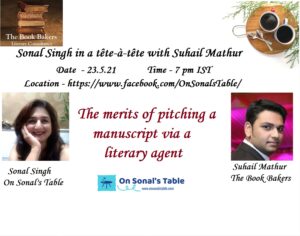 In continuation of our theme for the month of May i.e., to explore means for fledgling writers to gain a foothold in the literary world, our next session will focus on ‘Pitching a Manuscript’.

Writing a manuscript is just 10% of the job. No, I kid you not. The real work starts after that and involves pitching the books to various publishers, waiting for reverts (sometimes the process takes years), signing a contract, advertising and promoting the book, etc. The process from start to finish can be quite daunting for a new writer, especially one with limited knowledge of the publishing industry. Additionally, such writers who enter the arena often get fleeced by the unscrupulous publishing houses or get pushed into self-publishing (the costs of that can be astronomical and can range anywhere between ₹ 25k – 2 Lacs).

It is at this point that the role of an intermediary agent becomes pivotal. A Literary agent is a professional agent who acts on behalf of an author in dealing with publishers and others involved in promoting the author’s work. One of the best in this field in the Indian market is undoubtedly the ‘Book Bakers’. Join me in a chat with the affable Suhail Mathur as I pick his brains on the merits of pitching a manuscript via a literary agent. 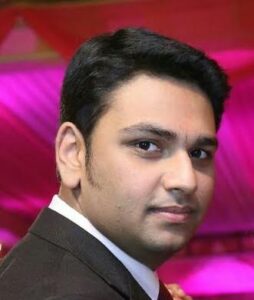 Suhail Mathur is an award winning and bestselling author of the historical-mythological fiction, THE BHAIRAV PUTRAS and the mythological-fantasy, THE HUNT FOR RAMA’S BOW, a TedX speaker, and is one of the country’s premier literary agents via his agency, THE BOOK BAKERS, through which he has worked on more than 700 books.

His name has also been listed as one of the ‘Top 51 Indian Writers To Follow’ by EBooksIndia and called ‘India’s JK Rowling’ by Enewsroom.com and ‘India’s Rick Riordan’ by ED Times.

He has sold several Book To Screen deals, worked with several actors, cricketers and bestselling authors apart from having written and worked on web series, TV shows and animated series. He is currently working in a leading General Entertainment Channel where he looks into new show development and the acquisition of international animation shows & movies, and Indian live action content.

His next 3 books, an autobiography of actor-cricketer Salil Ankola titled NO BOUNDARY IS BIG ENOUGH, a book on the first Dalit captain to lead a Hindu team to cricketing victory along with his brothers in pre independent India titled – THE PALWANKAR BROTHERS and the true and epic tale of one of India’s most successful undercover operations titled AMARNATH – The Unheard Tale Of Operation Fox Hunt are due to release in 2021, 2022 and 2023 respectively. 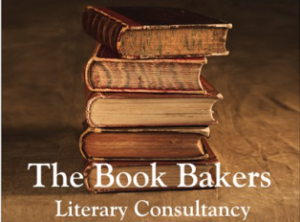 I believe that life is a repertoire of anecdotes. The various situations that we encounter, the many incidents of every day, the people we meet, our conversations with them; all make life a melange of tales. And, that is what I attempt to capture through my writing. My cooking is no different! It reflects my love for travel and my love for innovation. The kitchen is my happy place. So, even though by vocation I am a recruiter (www.rianplacements.com), by passion I am a writer, home chef and a hodophile.
@SonalSingh_rian
Previous Tête-à-tête with Penmancy on introducing, nurturing and publishing new literary talent – 9.5.21
Next Women adopt strays during the pandemic and exhibit that motherhood is not biological 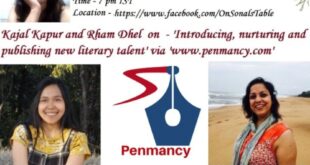 Tête-à-tête with Penmancy on introducing, nurturing and publishing new literary talent – 9.5.21 Link to …